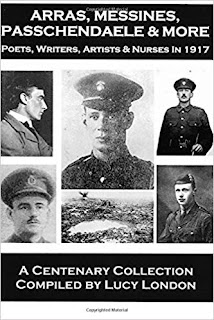 1917 is of particular significance to my family because Great-Uncle James Yule was killed on the Western Front on 9th April 1917 – the first day of the Battle of Arras. James has no known grave but is commemorated on the Arras Memorial in France.
My Grandfather – Lewis Jackson – was an “Old Contemptible” and fought with the Royal Artillery in Belgium and France in 1914/15. He later served in Mesopotamia and was with General Allenby when Jerusalem was liberated from the Ottoman Empire in December 1917.
This is the book of the commemorative exhibition held at The Wilfred Owen Story museum in Birkenhead in 2017 to remember some of the poets, writers, artists, musicians and nurses who were involved in the First World War during 1917.


Now available exclusively via Amazon.  CLICK HERE FOR ORDER LINK
Posted by Posh Up North at 04:43