Poems & Prose by Stanley Casson: Compiled by Lucy London. Edited by Paul Breeze. With a Foreword by Lady MacLellan. 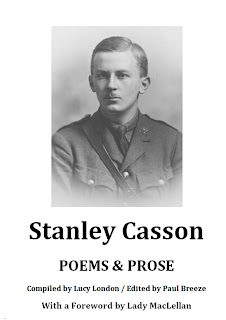 An overview of the life and writing of Lt Col Stanley Casson (1889-1944) who was an archaeologist and academic by profession but also a soldier in the two World Wars of the 20th Century.

This volume includes a short collection of poems that he wrote during WW1, excerpts and reviews of his archaeological writings and autobiographical accounts from the wars.

There is an also an in-depth study of the circumstances surrounding his death in a mysterious plane crash on the way to mission in occupied Greece in 1944.