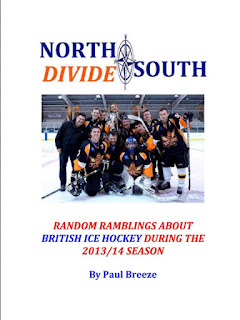 The 2013/14 season was a watershed year for me ice hockey wise. The Fylde Flyers team finished, leaving me with only recreational hockey to write about in Blackpool so I decided to branch out and cover the English National League in a more general manner.

I was kindly taken on by Blueliner.com as a guest writer where I was able to submit opinionated rants and occasional news stories as it suited me and I also started doing weekend round ups of all the league games on my own general Best Kept Secrets news and reviews website as well.

As I was being encouraged to widen the scope of the season review book that I had started to produce (and hopefully sell…), it made sense to set up my own dedicated ice hockey news website and this is how the Ice Hockey Review grass roots ice hockey website was born.

What you will find in this book is a mixture of opinion columns written for Blueliner.com and round-ups and news items that started off on bestkeptsecrets and, after January 2014, ended up on icehockeyreview.co.uk.

I hope that makes sense – it shouldn’t be boring, anyway…!